Art the consummate showman has always managed to keep a crowd on the floor at dances, to enthralling audiences at concerts, festivals and other venues. With his band covering many sounds and instruments the band line up consists of Drums, Bass, Guitar, Keyboards and Brass.

At this present time Art tends to play dances, cabaret shows, cruises, weddings and corporate functions where he is in much demand. Its all down to his program or lack of it. He does not follow a set program, if a style of music does not suit an audience he will change to something that will.

Art sings what the audience want on the night. From Rock and Roll to American Country, Jazz to The Big Band sound, Irish Music to Latin tangos’s, Swing music to Sounds of the sixties and many styles in between. His ability to read a crowd and entertain is what sets Art apart from many singers today. Art first entered the Irish Charts with the song ” Showband on Parade” on the Decca Label Rex at at Number 9 in Irish Charts during the showband era with a band called The Victors.

Since that time the business has seen many changes down through the years but through it all Art has been working hard consistently touring Ireland, England, America and many other exotic locations around the world entertaining every one, from Heads of State to Irish people living abroad. Art and his band are a truly professional group who provide a quality nights entertainment every time. 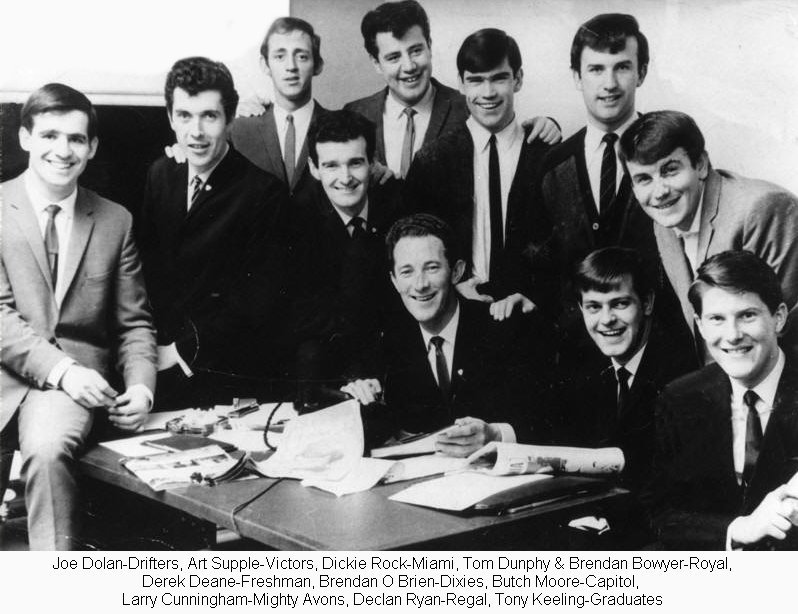 Art Supple didnt grow up with the ambition to be a professional singer. He was quite content to work on his fathers farm in the East Cork village of Gortroe, near the seaside town of Youghal in County Cork and it was more by accident then design that he drifted into the fast moving pop world of the sixties. Art started life singing in the local village hall with a local talant group called The Barrony Aces and as he grew a little older he started singing with a semi professional group led by local musician Pat Irwin. He might have continued to do this for a few more years before the farm demanded his full attention but a new professional band called The Victors were starting in Cork city. Acting on a tip from a local ballroom owner the Victors manager Terry Louge from the Clipper Carlton Showband decided to ask Art to audition for the position of lead vocalist

Art only 21 at the time agreed to audition and a new Irish recording star was on his way. Art & the Victors first hit single was a number called “Showbands on Parade” and it was the biggest selling single on the Irish Decca lable Rex in 1965. It was a also year which saw Art voted in the top 10 Showband Singers of the Year, top ten personalities of the year and The Victors were listed as one of the top ten Favourite recording showbands in The New Spotlight Music Magazine, the only Irish music magazine at that time 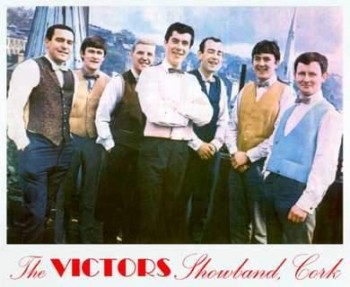 In his time with the Victors Art and the band released over 20 singles many of them reaching the Irish Charts. The band toured Ireland, England, Scotland, Wales, Germany, America, Canada, France & Spain. One of the most memorable venue’s the band played in was the Lough Locarno Ballroom in Toronto Canada. The Victors were the first ever Irish Showband to play Canada and went down a storm filling the Ballroom to capacity every night. They were asked to stay and do their own TV show in Canada with bookings guaranteed for a long time, but they had gigs at home in Ireland which had been booked two years before, so they came home and because they were so busy and popular at home they never returned to Canada. 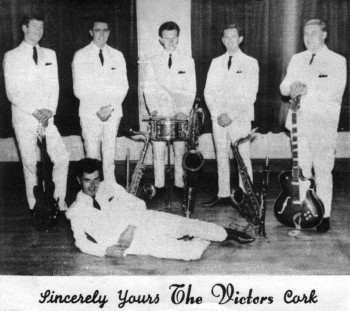 When asked about his favourite venues and ballrooms at the time Art replied that Best Venues for him were Redbarn in Youghal, The Priemier in Thurles which also had the biggest crowds, City Centre in New York, The Buffalo in Camden Town London and of course the Lough Locarno Ballroom in Toronto, Canada. It was a great time to be involved in the Showband scene in Ireland, any night a band were playing in the local ballroom was a night where everyone would meet. The ballrooms became the social gathering centres for many young people. All ballrooms were filled to capacity there were no discos or nightclubs. If you wanted to have a good night out then going to see your favourite band was the thing to do. 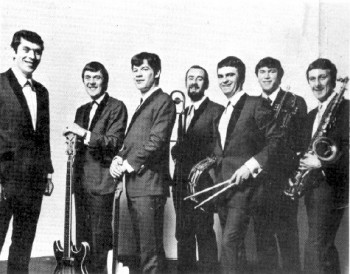 The music scene in Ireland during the 60′s was a great social evolution in Ireland and has not been equaled since, it was the forerunner for the music scene, as it exists in Ireland today. If you think U2 playing a rooftop gig and bringing traffice to a standstill in America was something new think again in the mid 60′s The Victors played on the roof of the Savoy Center Patrick’s Street in Cork City during daytime rush hour, bringing the traffic to a standstill. In the late 70′s the Showband scene was drying up so the Victors moved to the Cabaret Scene on the continent and worked in Europe for a few years until 1974 when the Victors eventually broke up. Art returned home with his family and when Brendan Shine asked Art to join the Brendan Shine Superband Art agreed and for the next few years worked with Brendan touring. 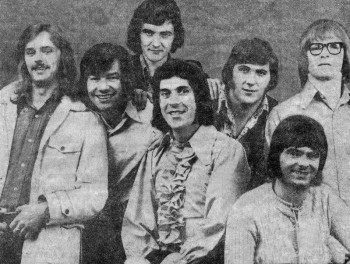 Then in the 70′s Art teamed up with fellow Corkman Joe Mac and Stage 2, working with Joe was great says Art, Joe is a fantastic musician and a great entertainer. It was an enjoyable experience working with Joe, he kept us going on many a long journey with his wit and storytelling. In the early 80′s the music scene was changing in Ireland and Stage 2 disbanded. Art then formed a group called The Showstoppers, who for most of the 80′s became one of the busiest and popular bands on the caberet circut. During this time Art was still recording new songs, doing television shows and touring. 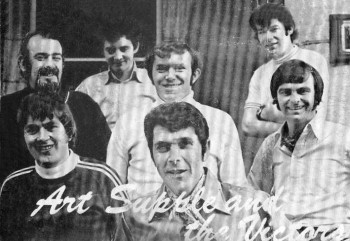 At the start of the 90′s, Art decided to put a new band together. My son Shane who has toured with me for the last 20 years on and off and the new band members are all younger then me so it keeps me on my toes says Art. Art has been an active member of the Jimmy MaGee’s All-Star football team which has raised countless thousands of pounds for charity over the last three decades, that coupled with the fact that Art has always been a keen Hurler has also helped keep Art in shape. Art played Senior hurling with Castlecomer in Killkenny, Jimmy Byrne from Castlecomer was the guitar player with the Victors a keen hurler , Art also played hurling with his home club, St Itas in Gortroe, Youghal. Co Cork until his last game at 55 years young. 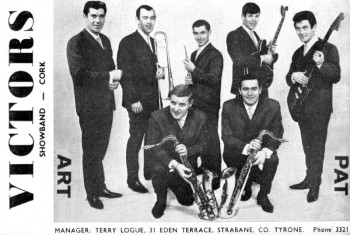 In 1999 Art was elected to a seat on Cork County Council and for his term in office he worked tirelessly on behalf of the people of East Cork. In 2003 Art celebrated over 40 years in the Music business and was presented with an Award for his service to the music business at a Gala night in The Walter Raleigh Hotel in Youghal, many of his friends from the showband era were present Sean Dunphy, Joe Mac and many of the musicians who had worked with Art over the last four decades. Never far from his roots Art always has time to chat and talk with people 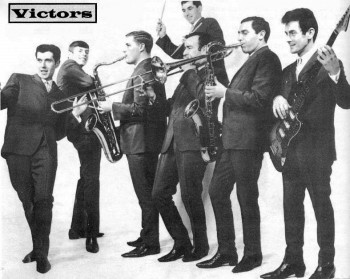 Art still tours with his band and is as popular as ever with many people.

One of the great things about this business, says Art. couples come up to me at the end of a night and tell me that they first met each other at an Art Supple & the Victors dance many years ago.

Ireland’s Own Article printed in 2004

How did the band begin? Did it evolve from a group or another band?
The Victors Showband started out as a hand picked Band from day 1.Each member was asked to become part of the band The Victors. By the management at that time.

Where was the band based? How did the band travel in the early days?
The Band was based in Cork, They traveled in a Themes Van first then moved on to a Comora Van and over time The Ford Transit became the Van of choice.

Managers? The Manager Was Terry Logue a member of the Clipper Carlton Showband.

What kind of music did the band play? Did any of the members write their own songs?
The music played was the pop music of the time and the sound of the Victors Showband was based on the group Sounds Incorporated that was predominantly 3 sax players and rhythm and bass

What records did the band release? Who were the featured vocalists? Record label? Chart success?

All Vocals were by Art Supple

What TV / radio shows did the band appear on?
On the Showband Show the first TV show for bands on RTE
Pick of the Pops
Various Christmas shows
Film: One for the Grave

Did the band tour outside Ireland? Any memorable venues?
The band toured Ireland, England, Scotland, Wales, Germany, America, Canada, France, Spain, A memorable venue would be Lough Locarno Ballroom Toronto Canada The Victors were the first ever Irish Showband to play Canada and went down a storm we were asked to stay and do TV etc in Canada with lots of work on offer but we had gigs at home in Ireland so we came home.

Any unusual publicity ideas?
Playing on the roof of the Savoy Center Patrick’s Street in Cork City during Daytime rush hour, bringing the traffic to a standstill

How / when / why did the band end?
In the late 70’s the Showband scene was drying up so the victors moved to the Cabaret Scene on the continent worked in Europe for a few years until 1974 when the Victors eventually broke up

After the band, where did the members go?
Some returned home to Ireland others moved on to further fields basically the four corners of the world is the answer to that question

Anything else of interest?
Just want to say that the Showband era was a great social evolution in Ireland and has not been equaled since, it was the forerunner for the music scene, as it exists in Ireland today.

No products in the cart.